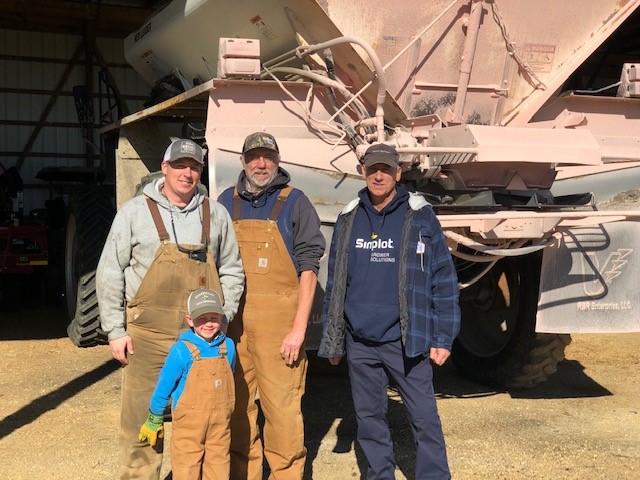 For the Broaddus family of Milford, Virginia, farming has been a “work from home” career for generations. Bates Broaddus, a sixth-generation farmer, works alongside his father, Lynwood, and his Uncle, Lynwood’s brother, Johnny Broaddus on Spring Hill Farm in Caroline County. Broaddus uses exceptional quality (Class A) pellets as a beneficial soil amendment to raise soybeans, corn, and small grains. He also oversees a small (about 40) beef cattle operation. According to Broaddus, most of the pellets used support the farm’s corn operation.

As many Americans have become accustomed to working from home over the past 2 years, Lynwood, Johnny, and Bates call their office Spring Hill Farm, the farmland just outside their backdoor. Lynwood said, “being able to work at your family’s home, especially as our parents (Bate’s grandparents) started to get older and their health began to decline, was especially important and helpful to us as caregivers. It allowed us to stay on top of daily chores on the farm.”

Each of the Broaddus men have their own roles on Spring Hill Farm. Lynwood manages spraying crops and fertilizing; Johnny handles running the combine during harvest; and, Bates primarily manages planting – and then there are many other jobs to maintain a successful farm. Lynwood and Johnny recall starting to use nitrogen and phosphate rich biosolids in the 1980’s, about the time when biosolids were becoming more popular as an option to improve soil health while providing the benefits of a fertilizer.

Lynwood, Johnny and Bates all agree that education around the use and recycling of biosolids is critical. Lynwood said, “It’s important for people to be educated on the benefits of biosolids for crop production.” “One benefit of using the biosolid pellets,” he said, “is only having to use pot ash as a soil supplement, which is easier to get over other mixed fertilizer.” As a consideration, he said, regarding biosolids; “When it comes to biosolids, we must all think, what would happen or where would it all go if it wasn’t used on farms?”

Biosolids, whether EQ pellets, like those used on Spring Hill Farm, or other biosolids or biosolids products used on more than 36,000 acres in Virginia in 2020 by farmers who choose to use them, would go into landfills and “provide no benefits,” Lynwood said. “So, why not use it as a beneficial resource containing essential plant nutrients and organic matter in the form of recycled fertilizer and soil amendment,” he said.

Technology has played a huge role in advancements on the farm and its operations. Johnny mentions how far precision agriculture has come over the years – so much so that instead of turning a key and adjusting multiple features on different parts of the equipment, now everything is simply right at your fingertips and much more simplified with just a touch of a computer screen. After years of renting the equipment and paying for a third-party to apply biosolids, the Broaddus family was able to invest in the farm’s own equipment to distribute pellets themselves. One of many benefits of spreading pellets with equipment the Broadus’ own is precision. “Owning and running our equipment results in a more precise distribution,” Johnny said, while also avoids potential timing delays such as product availability and labor challenges.

The productivity of Spring Hill Farm has created opportunity, which includes expansion. The family has added new land to grow its operations. And, with spring advancing, Lynwood, Johnny and Bates are looking forward to growing the farm, while also enjoying their time at home.