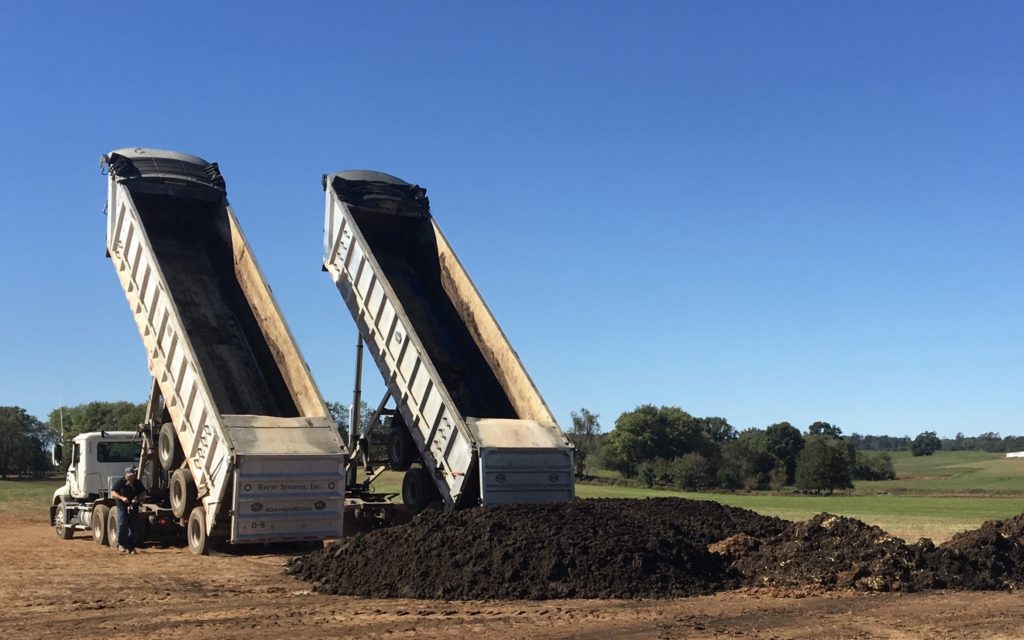 On June 8, 1863, Union General Alfred Pleasonton launched a surprise attack on the Confederate Calvary stationed at Brandy Station. General Pleasonton’s troops were the front line for the largest cavalry battle to take place in America, it was the beginning of the Gettysburg campaign.

The Spillman Farm is located near the front lines of the Battle of Brandy Station, which is in Culpeper County.

On this day Recyc Systems’ field crew is the front line working on the Spillman Farm. On a beautiful fall day, Robert ‘Buddy’ White is preparing fields for the application of biosolids – something he has done for 15 years. He works closely with farmers, in this case, Mr. Spillman, who chooses to use biosolids to improve the soil condition of their fields.

Working closely with White are equipment operators Carl Stringfellow and Michael Hanna. Stringfellow manages the delivery of approved material, ensuring it is safely ‘staged’ on the farm. Hanna operates equipment used to apply the biosolids in a manner that conforms to both regulations and the farm’s nutrient management plan. Hanna drives what is referred to as a ‘spreader buggy.’ Together, by the end of the day, this team would have applied the material and completed all of the necessary and important paperwork that is used to track and monitor all of the material recycled on the Spillman Farm.

Biosolids are recycled byproducts of the wastewater treatment process. The process of getting to a product that can be land applied safely to farms is complicated and extensive, requiring site-specific permits, soil testing, and nutrient management plans. Regulations administered by Virginia’s Department of Environmental Quality (DEQ) ensure biosolids are applied in a manner that is beneficial to the environment.

Still, the program is dependent on contractors, particularly those on the front line, to implement the permits and nutrient management plans. It is here that White, Stringfellow and Hanna work. “When we come to a farm our intention is to minimize impacts,” White said. This includes “minimizing impact to the landowner’s neighbors or to the environment, including limiting any impact to the farmer’s ground.”

Recyc Systems, recognizing the field crew has an on-the-ground perspective, encourages the field crew to use their best judgment when managing a site. “We have a certain amount of responsibility when we flag a field,” White said. “For instance, if we see that there is the opportunity to establish more space between a neighbor or a creek, we have the ability to extend the buffer” beyond the required setback. Buffers for the application of biosolids are included in both the federal and state regulations.

The teams’ ability to making sure both state regulations and social best practices are followed extends to making sure the material is suitable for land application and to how the application occurs onto the farm – in every way, according to Hanna, “our goal is to be a good neighbor.”

Stringfellow added, “The farmer trusts that we will do a good job to benefit his farm and to do the application in the best way possible. We know that the decisions we make will reflect on the farmer, the use of biosolids, and Recyc Systems.”

“In the end, our job is to make sure that we do no harm – to the neighbor or to the farm where we operate,” Hanna said. “We have to know the regulations, and then work with the inspectors, whether it’s a local monitor or DEQ. Our work is very public work,” he said.

So, in 1863 the Battle of Brandy Station lasted almost 14 hours. General Pleasonton realized there was little to gain and ordered his troops to break off the attack. It was considered a narrow Union defeat, however, the battle provided long-term strength and benefit to the federal cavalry.

As White, Stringfellow and Hanna move to complete their work for the day, they know that this farm in Culpeper and the farmer who tends it will see benefit and value from the biosolids, and that every effort was made to minimize impact to the neighbors and to the environment – while being compliant with the regulations. In other words, the biosolids application on this day was done well and right and will provide long-term benefit to the farm and its soil.