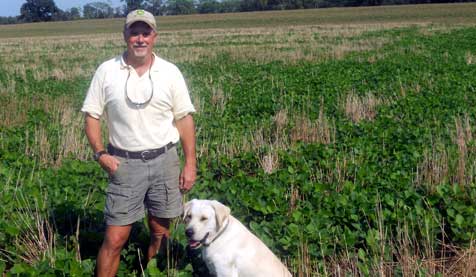 When David Black drives to work he travels on a driveway that’s been in use since around 1730, when Westover Plantation in Charles City County was built.  In addition to Westover, the Blacks farm nearby Berkeley Plantation as well as their family farm, which is also located in Charles City County.  Taken together, that’s more than 1,300 acres.  They use biosolids on all of the farms because, as David said, “it’s a wonderful soil amendment.”

David farms these properties with his father, George, who first started farming on Westover Plantation 45 years ago.  The land has been continuously farmed for almost 400 years.

“We take great care in the way we farm because of the heritage of these special places,” said David.  “The James River plantations are visited and toured by thousands of people each year.  And while both plantations are working farms, we can’t imagine doing anything detrimental to these historic and important lands.”

The landowners of both Westover and Berkely, he said, are satisfied with the decisions the Blacks have made, including their use of biosolids on their farmland that grows corn, wheat and soybeans.  Like a lot of farmers in the Chesapeake Bay watershed, the Blacks practice no-till cropping.  The use of biosolids, according to David, actually helps stem runoff from their farms since biosolids application stimulates rapid plant growth and reduces the amount of commercial fertilizer used.

The yields on their farmland are impressive:

One of the primary benefits of biosolids is one that isn’t the most discussed among the farmers that choose to use this material—its ability to help preserve open space.  In the case of the Blacks, their use of biosolids as a management tool helps keep the historic plantations as healthy and productive working farms and as a living part of Virginia’s history.