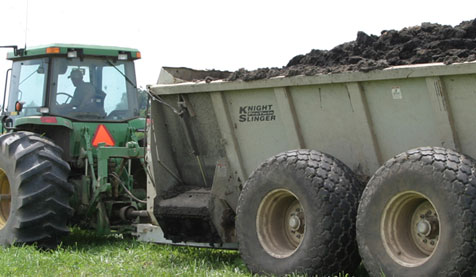 A report from a University of Arizona research group says biosolids, properly treated, pose little if any health risk to the public. ( Click here to download a PDF copy of the study.)

Ian L. Pepper, director of the NSF Water and Environmental Technology Center and a professor of soil, water and environmental science, or SWES, at the UA, led the study, a 19-year analysis tracking pathogens in biosolids from the wastewater stream in Tucson, Ariz. The study also included current data from 18 other wastewater treatment plants across the country.

The study’s co-authors include another SWES professor, Charles P. Gerba, as well as researchers from the U.S. Department of Agriculture, Loma Linda University and Drexel University. The study is the first of its kind since current federal regulations, specifically the Environmental Protection Agency’s Part 503 Rule, for wastewater treatment began in 1993. The Part 503 Rule governs how wastewater is treated in order to maintain public and environmental safety.

Most people in the U.S. live in communities where raw sewage is treated at wastewater facilities. Biosolids, the end product of the treatment process, have a broad range of uses in agriculture, from fertilizing agricultural fields and woodlands to lawns and gardens. Biosolids fall into two categories, Class A and Class B. Both use a combination of processes to kill pathogens including heating, composting, anaerobic digestion or changing pH levels.

Class A biosolids are those that have been treated to the point where pathogens are undetectable and there are no restrictions on their use as fertilizer. Standards for Class B biosolids are less stringent and have small but measurable levels of bacteria and come with restrictions on how they can be used on crop plants, grazing livestock and human exposure.

Pepper said one big question has been what kind and how many human pathogens are found in Class B biosolids. He said the study analyzed data prior to and after 1993, when the Part 503 rule took effect in order to determine the impact of regulations. The study, Pepper said, showed that concentrations of fecal coliform bacteria and viruses are actually lower than 1993 levels. It also showed that between 94 and 99 percent of pathogens are eliminated by wastewater treatment, crediting treatment in reducing pathogen loads.

“Further, the fact that pathogen levels are lower now than in the 1980s shows that the Part 503 Rule has been effective in reducing public exposure to pathogens relative to 25 years ago,” he said. The study suggests that levels of some enteric viruses, the bacteria Salmonella and Ascaris ova, or roundworm eggs, in the U.S. are low in Class B biosolids that are treated by anaerobic digestion. Pepper and his colleagues also found no Campylobacter or E. coli bacteria in their tests.

Other studies suggest that Class B biosolids also are treated further simply by exposure to sunlight, wind, heat and soil microbes as they are distributed as fertilizer. Using biosolids as fertilizer also is a more ecologically sound approach to their disposal than either taking up space in landfills or polluting air and water through incineration.

The UA Water and Environmental Technology Center has gained a nationwide reputation for research on biosolids by providing data on human exposure to microbial pathogens, allowing for risk assessments on potential adverse effects of pathogens on human health and welfare.