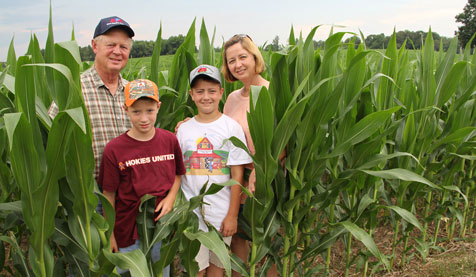 Joe Hazlegrove, Jr. says his ancestors were poor farmers who came from England over 200 years ago. “And we’re still poor farmers,” he jokes.

While his “poor” description of his 2,200-acre Forkland Farms dairy operation in Cumberland County is clearly an example of his modesty, the reality for most dairy farmers in the U.S. has been grim.  According to the U.S. Department of Agriculture, in 1970 there were 648,000 dairy farms in the U.S.  By 2009, there were only 65,000.

Virginia dairy farmers have experienced a similar decline.  According to the Virginia State Dairymen’s Association, in 2009 there were only 715 licensed dairy farms in the Commonwealth, with a total of about 95,000 cows.  In 1960, the number of dairy cows in Virginia was estimated at 350,000.

Hazlegrove serves as president of the Forkland Farms operation, on land that has been in his family since 1849.  He received his B.A. degree in history from Hampden Sydney College in 1967 and served a total of 27 years in the Air Force, retiring as a Lieutenant Colonel in the Air Force Reserves.

Faced with increasing prices for everything, including fuel, labor and feed, coupled with growing regulatory burdens and soft prices for milk, Hazlegrove says that the choices for dairy farmers were stark: either grow or get out of the business.

In addition to the 2,200 acres owned, Forkland also leases an additional 300 acres.  That acreage gives the farm the room to plant 500 acres in corn, 400 acres in soybeans, 125 acres in barley and 330 acres in wheat—most used as feed for its dairy cows and 25 beef cows.  The farm also sells some corn, wheat, barley and soybeans as cash crops.

Hazlegrove says the use of biosolids as a fertilizer and soil amendment is vital to his success.  “We started using biosolids in 1996,” he says, “and immediately saw crop and hay yields increase by as much as 50 percent.  In addition, we noticed that crops, hay fields and pastures were much more resistant to drought.”

The farm also applies its own cow manure as a fertilizer in some fields.  All manure and biosolids are land applied according to State-approved nutrient management plans developed to meet specific needs of each crop and field, explains Hazlegrove.  The only commercial fertilizer used on the farm is potash.

While it’s necessary to buy some specialized commercial dairy feed to ensure a balance diet, most of what his dairy and beef cows eat is grown on the farm.  “Being self sufficient for feed is the only way to survive and prosper in the dairy business,” explains Hazlegrove.  “Using biosolids translates directly into more feed, which means more cows, which means more revenue.  Take away biosolids and I’m not sure what we would do.”

The dairy operation is managed by Hazlegrove’s daughter, Lacie Womack, who received her B.S. degree in dairy science from Virginia Tech.  She and her husband, Robert, live on an adjacent 800-acre farm that raises beef cattle and poultry.

The Forkland Farms dairy is a member of the Dairy Farmers of America marketing cooperative and sells its milk to Marva Maid Dairy in Newport News, a farmer-owned cooperative.  No growth hormones (rBGH) are used in Folkland’s dairy cows.

Forkland Farms has been recognized by the Commonwealth as a Virginia Century Farm, which means it has been owned and operated by the same family for 100 years.  The farm has also received recognition for wildlife management and numerous annual Clean Water Farm Awards from the Virginia Department of Conservation & Recreation for its conservation efforts to protect the quality of the Chesapeake Bay.