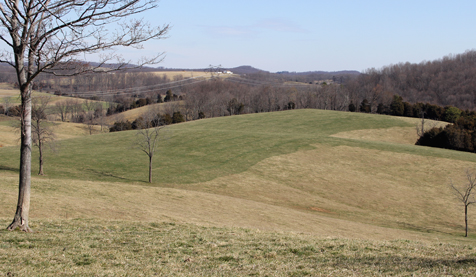 For motorists speeding along I-81 through Virginia’s Shenandoah Valley, the pastoral panorama of rolling hills, distant mountains, fields and grazing cattle could certainly create a longing for a simpler, more peaceful lifestyle.

But for city folk who think farming would be a good way to slow down and “smell the roses,” well, you might want to keep on moving.

While farming in this scenic region of Virginia certainly offers many rewards, relaxing isn’t one of them. And smelling the roses is likely to include the fragrance of manure.

Anita and Kenny Earman knew what they were getting into when they bought Tanglewood in 1991, their 411-acre farm in southern Augusta County. Kenny, who had an excavation contracting business in northern Virginia, had operated a small cattle farm on 69 acres in Loudoun County for a number of years.

“We knew it would be a lot of work,” explained Kenny. Fences were repaired and built, eroded hillsides were graded and seeded, and miles of water lines for new cattle troughs were installed. “Being in the excavating business was a big help,” said Kenny, providing both the experience and the equipment he needed.

From the start, said Kenny, Anita has been an equal partner in providing the physical labor necessary to restore the farm and keep it operating. An example is her maintenance of the 20 miles of fences on the farm, which she keeps clear of undergrowth with a power trimmer. While the fences certainly look good, the purpose is to prevent briars, vines and trees from growing up and damaging the fences.

“We fenced off most of the woods, other than some areas to provide shade for the cattle during summer,” said Kenny, who explained that cattle can damage trees, which can lead to soil erosion. The pastures were subdivided by fencing so that cattle can be constantly moved to a new field with fresh grass, giving the previous pasture a chance to recover.

“We also fenced off all streams and a small pond,” said Anita, “so that our cows can’t put a foot in water anywhere on our property.”

In the past three years, biosolids have become an important factor in the farm’s conservation efforts and profitability, said Kenny. All of the available pastures and hayfields on the farm receive an annual application of biosolids at a 50 percent agronomic rate. Cropland receives the full agronomic rate every three years.

All applications are based on nutrient management plans approved by the Virginia Department of Conservation & Recreation (DCR), which are designed to provide the amount of nitrogen that can be taken up by the crop and to minimize runoff of nitrogen and other nutrients.

The biosolids are applied by Houff’s Feed & Fertilizer of nearby Weyers Cave. According to Tim Grove, biosolids manager for Houff, the Earman’s farm receives biosolids in liquid form from nearby municipal wastewater treatment plants and from wastewater treatment plants operated by food and beverage manufacturing companies, including breweries, dairy product manufacturers, candy makers and industrial bakeries.

The value of land-applied biosolids, which is provided free to farmers, is worth from $250 to $350 an acre, compared to the cost of commercial fertilizer and lime.

Kenny said that the biosolids have greatly improved his pastures by making the grass healthier and thicker, which not only provides more nutrition for his cattle, but also helps choke out the weeds and reduce the potential for erosion. “I get the biosolids every fall,” he said, “but I couldn’t afford to apply commercial fertilizer every year, so the benefit is really significant.” Hay production has also increased, he said, meaning more feed for his cattle during the winter.

“Notice that there are no signs of runoff from the upper fields that received biosolids,” he said. “With commercial fertilizer, you would see streaks of green running down the slopes, but not with biosolids. They release their nutrients slowly so that the grass can take it up.”

Kenny said he hopes that new regulations adopted by the Virginia Department of Environmental Quality (DEQ) will allow more flexibility in applying biosolids to slopes. “The slopes are most susceptible to erosion,” he said, “so that is where you really need biosolids to promote healthier grass that holds and enriches the soil. I think each slope needs to be evaluated individually on the basis of the good biosolids can do verses the potential for the nutrients to make it to a stream.

“For example,” he said, “we’ve got a filtration strip of grass almost a mile wide between some of our slopes and the nearest stream. There’s no way nutrients from biosolids are ever going to make it to that stream.”

The Earman’s conservation efforts earned the farm the “Bay Friendly Clean Water Farm Award” in 2005 from the Headwaters Soil and Water Conservation District, which includes more than 600,000 acres in the Shenandoah Valley, including Augusta County and the cities of Staunton and Waynesboro. The award recognizes farmers “actively engaged in nutrient management practices and other important practices that control agricultural nonpoint source pollution.”

In addition, the Earman’s farm was one of only 10 in the state to receive the “Grand Award” in 2005 from the Virginia Department of Conservation & Recreation for “exceptional conservation efforts” in nutrient management and soil and water conservation in the Shenandoah River Basin.

The Earman’s results are proof that good conservation is an essential ingredient in building a successful—and profitable—farming operation. The farm currently supports about 110 brood cows and four bulls, which produce more than 100 beef calves for market each year, split between a fall and spring herds. The calves are raised on the grass in the pastures, and on hay during the winter, until their weight is about 700 pounds. They are then sold at market and shipped to the Midwest to be grain fed until ready for slaughter.

Growing corn for sale as feed to the area’s poultry operations and selling surplus hay to other farmers produce additional revenue.