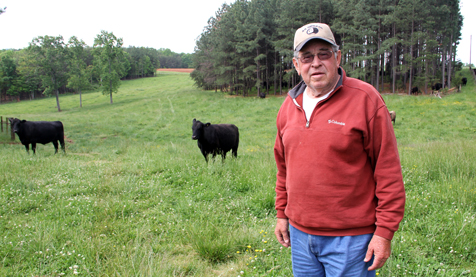 “Farming’s in my blood,” says Buddy Campbell, who at age 79 still manages a herd of about 100 Angus brood cows and 90 calves on his 600-acre farm in Franklin County. “It’s just a hobby now,” says Campbell, who retired years ago as a pipefitter at the DuPont plant in Martinsville.

While he admits that most men his age don’t have such a strenuous “hobby,” Campbell says “most men who retire and just sit around are dead in a few years. This farm keeps me going.”

The farm, explains Campbell, has been in his family for three generations and for much of the time relied on tobacco as the main source of revenue. He grew up in a little white frame house just down the hill from his present home and his parents and grandparents are buried in the nearby family cemetery. The state road leading to their house is named Campbell Road.

“We’re out here in the middle of nowhere,” says Campbell, who quickly adds that that’s the way he and his wife, Betty Ann, like it.

Indeed, the scene from their hill-top home is breathtaking: rolling hills of pastures, hay fields and forests in all directions, with misty views of the mountains to the north and west, including Smith, Chestnut and Boones Mill mountains.

Campbell says he gave up growing tobacco some years ago, which is much more labor intensive than raising cattle. “With the right equipment,” he says, “one man can do most of the work around here.”

An example, he explains, is handling the large five foot diameter round bales of hay used to feed his cows during the winter. A tractor-mounted front-end loader with a “spear” enables one man to easily move the 1,200 lb. bales to the cattle in the fields or to load multiple bales on a truck bed.

The need to buy and maintain expensive equipment is just one of the reasons why Campbell values the biosolids applied on his pastures and hayfields. “You have to fertilize your fields if you want the grass to be healthy and to crowd out the weeds and broom straw,” says Campbell. “I get the biosolids at no cost, including the application. That eliminates much of the expense of commercial fertilizer, which keeps going up each year. Biosolids help keep me in farming.”

Campbell has been receiving biosolids since 2007 and says that the material has increased his hay and grass production by a third or more.

He receives liquid biosolids produced by the Western Virginia Water Authority in Roanoke. The biosolids are land applied by Bio-Nomic Services, Inc., which provides the material to farmers in Bedford and Franklin counties, under contract to the Authority.

Campbell says that the biosolids from Roanoke are very low odor and applications usually go unnoticed by most of his neighbors. Even the patrons of his wife’s hair salon, which is located in the lower level of his home, don’t notice the applications, he says.

According to Don Green, compliance specialist with Bio-Nomic Services, the company has been spreading biosolids at less than the agronomic rate on 225 permitted acres. The lower rate allows for annual applications.

Green says that his company is also spreading biosolids on some nearby farms in the Snow Creek section of Franklin County and has requests from other farmers in the community to add their farms to the program.