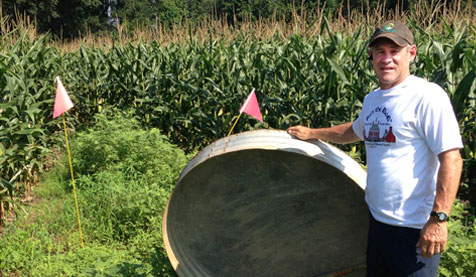 In the 1950s the Davis brothers purchased about 1,200 acres along the Pamunkey River in New Kent County. Today that farm remains as productive as ever.

Farmed by former extension agents—Paul Davis and his father, Clifton Davis—and other Davis family members, Davis Farms has become welcoming land for researchers from Virginia Tech and elsewhere who want to learn more about a variety of agricultural issues, from biosolids to seeds and weeds to soils.

“I really appreciate the opportunity to work with any of the folks who reach out to us for research, including Virginia Tech,” explained Paul. “We’ve been doing that for more than 30 years. I personally see it as an opportunity to continue my education.”

Davis Farms has also chosen to use biosolids. Its first application was in 1996.

One of the research initiatives currently underway on his farm is one co-sponsored by the Virginia Biosolids Council and the Virginia Small Grains Board. This two-year study is estimating Nitrogen [N] mineralization and plant available N from fall-applied biosolids for small grains. By comparing crop response and environmental leaching risk of biosolids applied at different agronomic N rates in the fall with synthetic fertilizer management practices, the research is expecting to determine how efficiently biosolids are used by plants.

While the results are preliminary, first-year plant growth following fall-applied biosolids was greater than that from fall-applied synthetic fertilizer. Additional sampling is still necessary to fully determine the amount and distribution of N in the soil following harvest.

“Everything has its gives and takes,” said Paul. “Biosolids is great stuff. The nutrients are there that plants need to thrive. However, in today’s environment, we have to be more gentle with the land and take care of our soils in a way we didn’t previously.”

For Paul, that means asking his biosolids contractor to take special care when both staging biosolids and land applying. While previous biosolids applications were disked into the soil, today that is not Paul’s preferred option, since he now practices no-till farming, which is a way to grow crops year-to-year without disturbing the soil. Rather, he used a ripper for the recent biosolids application, or turbo till, which causes minimum soil disturbance by minimizing soil compaction.

As the former extension agent for New Kent County, like his father, he said, “I tell my friends who farm that I believe firmly that it is the farmer’s responsibility to make sure he understands everything that’s going on in his fields, most importantly managing his nutrient plan.”

In Virginia it is a requirement to have a site-specific nutrient management plan prior to biosolids land application. “This takes very active management,” he said.