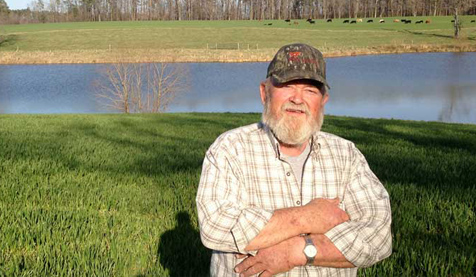 In that case, the Supreme Court held in 2001 that the ordinance approved by the Amelia County Board of Supervisors had the effect of illegally preventing something that was authorized and regulated by state statute. Following that decision, the Virginia General Assembly enacted legislation that allowed any county or city to adopt an ordinance providing for the testing and monitoring of land application of biosolids to ensure compliance of applicable laws and regulations. The primary reference to this case is Reuben L. Blanton, Jr., a generational farmer still working property in Amelia County that his family purchased during the Civil War. Blanton continues to grow various row crops—corn, soybeans and in the winter, barley—and also tends a herd of approximately 200 brood cows.  He didn’t like it when the county tried to ban the use of biosolids in Amelia, and he still doesn’t like it when too many regulations restrict the management of his farm.

“I’m a farmer.  I care for the same land my dad and his dad worked and I would not do anything to hurt this farm,” Blanton said.  “I have never used anything that provides the nutrient value, and helps the soil and plants, like biosolids.”

More than anyone, Blanton understands biosolids and the public’s perspective.  “Unfortunately, I think the Internet creates a lot of problems for the public, and I also think the public is challenged to understand why there are so many regulations telling us how and when to use it.” He has about 30 fields permitted for biosolids—most of the 600 acres he farms.

“I’ve been using biosolids since around 1996.  I will continue to use it because I haven’t found anything that helps my farm any better,” Blanton said. As for his legacy, he is most proud that the case he spearheaded with others in the biosolids community has had a positive impact on farmers and their right to farm.